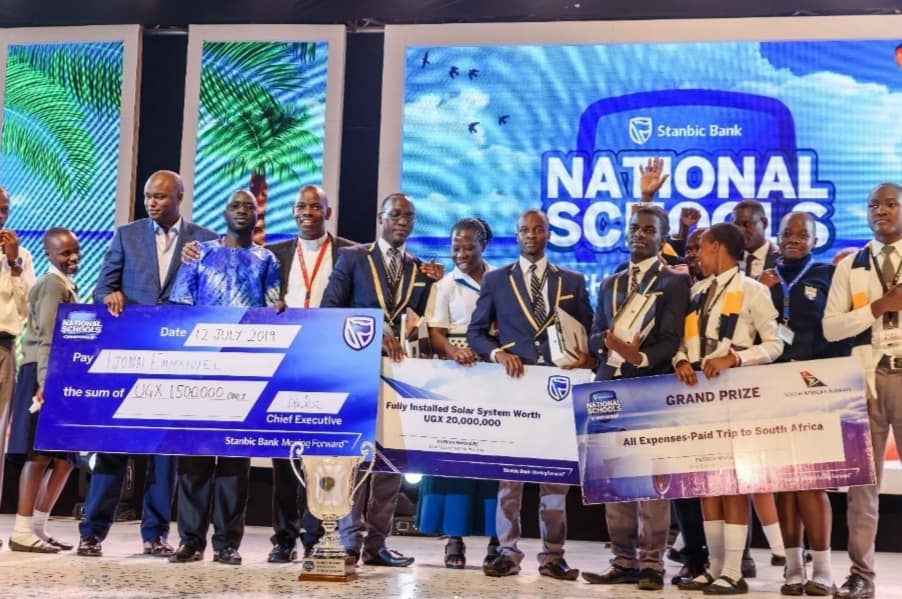 70% of Uganda’s population is below the age of 24 yet statistics in Uganda suggest that 83% of people under 24 years are unemployed majorly because most graduates lack employable skills.

The objective was to nurture young people between the ages of 12 to 24 to develop positive attitudes, values and coping skills which subsequently prepares them for greater responsibilities in the future, hence the birth of Stanbic National Schools Championship.

The championship trains and empowers students in high schools across the country in entrepreneurship, financial literacy and life skills. They go through an intensive program which models them into forward thinking entrepreneurs.

It is all about empowering future leaders and job creators. They have been able to register over 1500 children who have started up over 100 successful businesses. The children are given 500,000 Uganda Shillings as seed capital and they have seen children between 12 to 20 starting business in 2021.

The team from the Stanbic National Schools Championship does due diligence at the appraisal stage, they follow up to confirm that the business is on ground, they find out what they can do to help these young entrepreneurs move from point A to point B. They also move with business consultants on this journey in order to acquire knowledge on how to successfully run a business, how to do book keeping and acquire financial literacy.

At the end of different stages, there has to be a winner and on the 16th September (Thursday) there will be the championship stage of 2021.

“We shall have investors and invite people who are going to support these young entrepreneurs have sustainable businesses.”

Said Sarah the spokes person for the championship.

We shall be live from 8:30am to 5pm on all our social media platforms and TV channels. The winners shall get gifts like phones laptops, solar. They will be judged on start up business and the best “pitch your business in 2 minutes.”

The championship is not only about children winning prizes but also creating a plat form for young people to express themselves. “It’s not about the gift you get it’s about the skills you’ve earned.” Says Sarah during an interview on NBS TV

Which regions in Uganda have benefited?

Different regions have gained from the Stanbic National Schools Championship. For example in Northern region there is Hope schools affiliated to Watoto church. They identified a boy called Raphael who had 4 fish and his business was being despised by others but he insisted on it because he knew one can never go wrong with food. Raphael now has impacted other children who have started 10 other projects from what Raphael did!

There’s another story in Eastern region. A teacher was identified who said her heart is for the children and these have thrived on social capital which is a unique factor. They even pitched to the church they were belonging to, into supporting their pumpkins business and they now also ventured into making modern charcoal.

In Western region, there’s kyebambe girls doing the Lava project under the black soldier fly. There was a young girl who wanted to do sciences but she didn’t get the grades she had anticipated, so she decided to do research from mountains of the moon in the field of sciences which she wanted to venture in and from there she started a project.

In Central region they have Buddo. The children from Buddo saw a problem and made a product that prevents one from getting wet while being hit by the rain. They are still in the process of officially making it public but it’s going to be the first of it’s kind in Uganda. These children are now owning the narrative.

They engage the community in this championship because what they want to achieve is to develop every community in different parts of the country. Empowering children to earn a living wherever they are.

Sarah emphasized that resumes are not enough today, we need more skill. The paper is good but it’s not the only tool. Let’s encourage Skilling. Market is not only Uganda anymore its global.

What’s in for Stanbic?

Banks cant make money without giving back to the community. So that’s why Stanbic is empowering children, the education sector, environment and health sector. That’s how any bank is going to be successful today in Uganda.

There has been a realization that 60% of the businesses have gone to the agricultural realm, children have embraced agriculture, making porridge from ddoodo (greens) , started urban farming and all this the children have discovered themselves. They are now thinking outside the box. Digging is no longer a punishment.

So children should never give up someone is watching you.