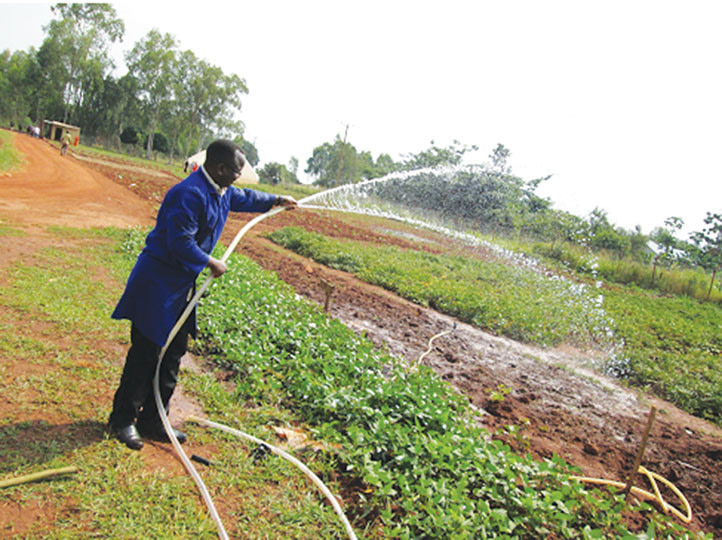 Most peasant agriculture depends on rain as a source of water/moisture for the soil, and scarcity of rainfall often results in widespread crop failure and famine. Unfortunately over the last few decades, climate change has meant that rainfall patterns have become unpredictable. The frequent crop failure has resulted in widespread food shortages, famine, and death. Owing to Uganda’s reliance on agriculture as a source of income, widespread poverty has also set in, thereby slowing economic growth and development.

Students and lecturers at the Makerere University College of Engineering, Design, Art and Technology have designed and manufactured a low cost water pump to help farmers reduce the costs of irrigation. The Low cost irrigation project is also engaged in testing this pump and educating farmers on the different types of irrigation let alone the importance of it.

The pump that uses 2 horse-powers can deliver 100litres of water per minute up to a height of 20metres. It costs UShs500.000 and can be purchased at the college. However, work is on-going to bring the cost down to UShs300.000 so as to make it more affordable for farmers. “Through this project farmers in rural areas especially in western Uganda (Kasese) and Soroti have been helped to start irrigating their crops. Workshops have been organized where the communities have been able learn about the different technologies needed in irrigation such as pumps, pipes, sprinklers, channels and drip lines”, said Prof. Joseph K. Byaruhanga, the Project Principal Investigator. They have also learnt the different types of irrigation, which include; solar irrigation, gravity irrigation, and engine driven irrigation. All these are affordable ways of irrigating gardens.

The project has trained about 500 Local Government officials including National Agricultural Advisory Services (NAADS) staff and water officials on the methods of irrigation, and the benefits thereof. Another 500 farmers have also been trained. The aim of training Local Government officials is to have a big number of people that can educate the poor farmers. The project has acquired 20acres of land in Masindi from the District Administration. The land is going to serve as demonstration ground for farmers in this and neighbouring districts.

Future plans include extending the project to Busoga region, Lira and Gulu districts. Through irrigation, farmers can produce crops all year round; hence reduce the costs of food products. This will be of great advantage to farmers, who will be able to sell their produce during the off-season. The most common grown crops include Maize, Upland Rice, Beans, Mangoes, Bananas, Cabbage, Eggplants, Pineapples, Chillies, Watermelon, Flowers, Tomatoes, Peppers (yellow, red, green), Potatoes, Oranges and Onions. All these can flourish when supplied with adequate water.