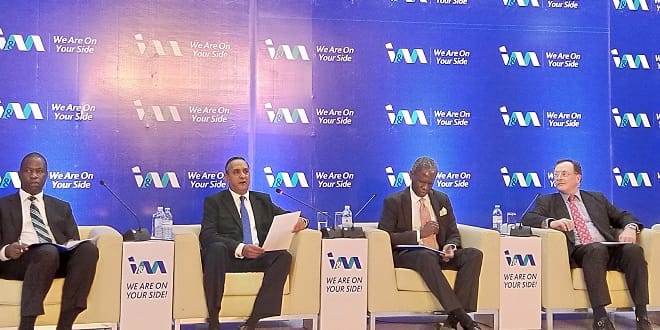 I&M executives during the the rebrand of Orient Bank at Kampala Serena Hotel.

Local lender, Orient Bank is getting a revamp, ending a nearly 30-year history in Uganda. The lender is ditching its name to I&M Bank (Uganda) following the latter’s decision to acquire a 90% shareholding in Orient Bank Ltd (OBL) from 8 miles LLP and Morka Holdings Limited, saying it is part of its broader regional expansion strategy to serve the needs of all customers at local and regional level, while promoting trade flows within the region.

Orient Bank CEO, Kumaran Pather, said I&M Group Plc. and its subsidiaries have invested in crucial sectors of development across East Africa’s regional economy, including Banking and Finance, SMEs, Real Estate, Fintech, Trade, Agriculture and Infrastructure, and that the Group will continue to play a critical role by investing in these sectors while offering holistic financial solutions to individuals, small businesses and large organizations in Uganda.

“I&M has made significant investments in its technology infrastructure as part of its digital transformation journey,”

He added: “Therefore, being part of this Group is a great opportunity for Orient Bank customers who will now enjoy benefits from this technology with a wide suite of market-driven financial solutions aimed at meeting their financial needs and lifestyle requirements.”

Pather said the rebranding exercise is being done in a phased manner, starting with physical refresh of the branches and ATMs; and then over time to the rebranding of all other digital and other physical assets.

The bank account details will remain the same and the customers will continue to carry out their banking transactions as they did before the rebranding exercise. There will be no fees or charges associated with the bank’s name, change for customers and all branches will continue to operate as usual, during normal banking hours.

“Orient Bank’s cards will continue to work as before at ATMs, point-of-sale (POS) terminals and online until 31st December 2023, or their date of expiry if earlier and Orient Bank branded cheque leaves will be valid until 30th September 2022— therefore the Bank will honour all instruments issued by it and used by its customers including those instruments of Orient Bank Limited throughout this transition period”

Meanwhile, the Kenyan based company has already begun re-organising its operations, setting-up the stage for heightened competition for regional businesses.

The Group, which also has presence in Kenya, Rwanda, Tanzania, Mauritius and now Uganda, is expected to stir competition with its peers such as KCB, Equity and NCBA Banks that have dominated presence across East Africa.

Currently, the 12th largest bank in the country which boasts of 25 commercial banks, Orient Bank recorded a Shs22.6bn loss in 2020, up from Shs1bilion loss a year before citing effects of coronavirus pandemic that saw it record a surge in administrative costs.

The bank’s administrative expenses shot up by 12.8 bn to nearly Shs38bn during the same period last year compared to a year before. However, in 2018, it recorded a net profit of Shs5.5bn.

I&M Group PLC, was incorporated on 16th August 1950 and is listed on the Nairobi Securities Exchange (NSE).

The Group was licensed and approved as a non-operating holding company in accordance with the provisions of the Banking Act, Cap 488 Laws of Kenya following a reverse takeover of City Trust Limited by I&M Bank Limited in June 2013.

The Group recorded 33% growth in profit after tax to Shs134.6billion for 2021 half year period ended June.30. The bank’s net interest income grew by 28% to Shs285.2 billion citing increased interest income from government securities. However, the group’s total non-funded income reduced by 6% to Shs124.9 billion during the same period under review.

The lender’s net non-performing loans, too, reduced by 8% compared to June 2020, to close at Shs240.3billion attributed to strengthened remedial actions in improving the loan book quality. However, its assets grew by 12% to Shs12.2 trillion up from Shs10.9 trillion in June 2020 bolstered by expansion into Uganda and increased private and public sector lending. The acquisition of Orient Bank has expanded the group’s balance sheet by Shs753 billion.

DFCU Bank joins in the annual celebration of the King of Buganda
URA; Mobile tax hub for kikuubo traders