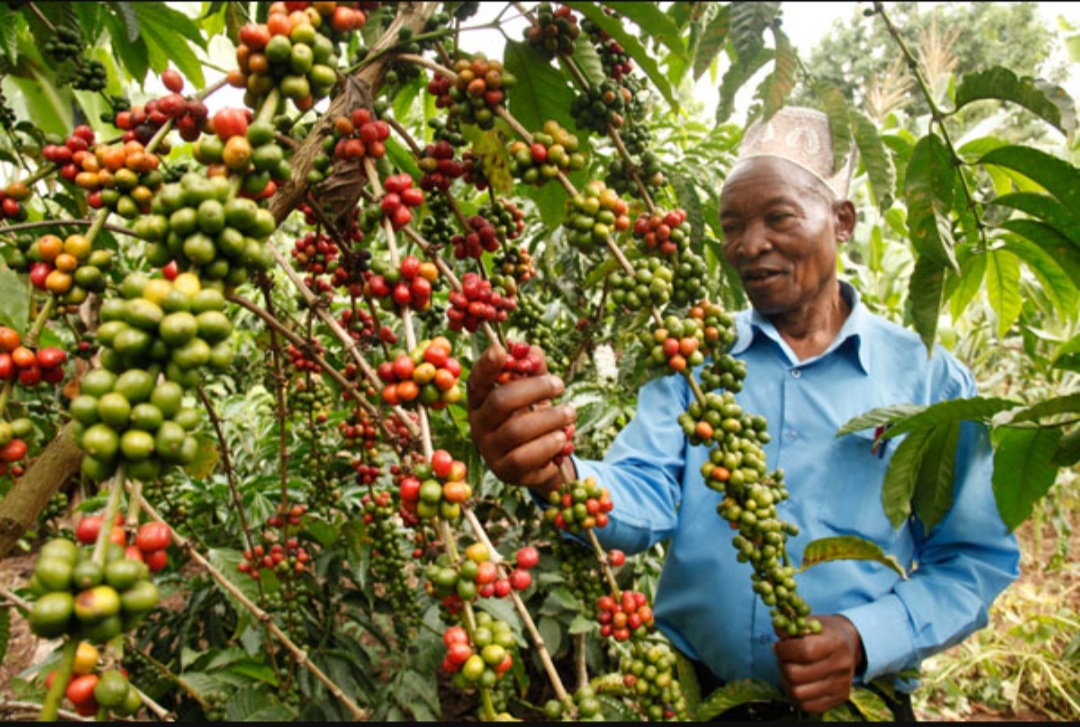 The news of President Museveni’s assent to the National Coffee Act recently has spread like wildfire among farmers and all stakeholders in the coffee sector.

The Act has attracted a lot of attention because coffee plays such an important role in our country’s economy.

Uganda is the second-biggest coffee producer in Africa and 10th in the world. Coffee is said to be the most widely traded tropic agricultural commodity internationally and also the most traded commodity globally after oil.

It provides employment to about nine million people in Uganda through coffee-related activities besides being the most important foreign exchange earner crop in the country.

The National Coffee Act 2021 has come when Uganda now realises that coffee is a strategic commodity whose production and productivity must be enhanced and regulated to compete well with other international producers of the crop. Gerald Ssendaula, former minister of Finance and now a farmer, has told Seeds of Gold: “This is a law that we have been craving for as coffee farmers for many years. You remember we fought hard to get the National Coffee Policy which Cabinet approved in 2013 but there was still a big need for a law such as this one to safeguard and regulate good coffee production practices.”

He explained that the law is set to prevent bad coffee handling practices such as people drying coffee on an open soil surface which introduces foreign objects and smells into the crop and spoils its taste.

He said all people that will fail to comply with the law will be prosecuted and punished.

He has also strongly appealed to the government to let Uganda Coffee Development Authority (UCDA) operate independently and not be merged with any ministry as this would weaken its capacity to enforce the Act due to unnecessary bureaucracy.

Ssendaula who was the deputy minister of Trade and Commerce when the Uganda Coffee Marketing Board (CMB) was scrapped and replaced by the Uganda Coffee Development Authority (UCDA), says: “The government was not really a good salesman. There was too much bureaucracy at the CMB and lots of things were not as efficient as they ought to have been done. This was not only at CMB but also in many others such as Lint Marketing Board (LMB) and Produce Marketing Board (PMB). There was also a global wave to liberalise the trade in agricultural commodities.

We, therefore, chose to do the regulation instead of being directly engaged in coffee marketing and setting coffee prices.”

He went on to explain that in 1991, UCDA became a regulatory body under the Uganda Coffee Development Act, Cap.325 with the duty to ensure that exporters, hullers, roasters and other players did their job well and lawfully. That law was amended in 1994 and it became the Coffee Regulations, 1994 to further strengthen UCDA’s powers.

The authority was therefore given the obligation to register all coffee buyers, processors and exporters and to issue them with certificates. However, it was soon realised that UCDA under the existing law back then could only regulate the marketing of coffee.

For example under Part 11 Registers and Registration Certificates for Internal Marketing Part 4 it is written: “This regulation does not apply to a person storing coffee grown by him.” The law clearly only affected those owning a pulping machine, coffee stores, roasters, and exporters.

Over the years it was realised that both the Uganda Coffee Development Authority Act and The Coffee Regulations, 1994 could not be relied upon for proper regulation of the coffee crop since they only covered off the farm activities.

For example, they could not be used to prosecute a farmer who picked green coffee cherries or who dried his coffee on open soil surface. The laws only covered the traders, hullers, processors and exporters. The formulators of the laws were totally blind to the crop’s on-the-farm activities such as post-harvest handling, planting materials, crop husbandry practices, extension services, and the challenges of climate change that the farmers face. Yet the quality of coffee heavily depends on how it is handled by the farmer.

The law will fight aflatoxin

Ssendaula, who is also a leading coffee farmer says: “If a farmer mishandles coffee it can mould and produce aflatoxins which can cause an international outcry about Ugandan coffee. This newly formed National Coffee Act 2021 gives powers to UCDA to regulate coffee handling on the farm — what varieties the farmer plants, how it is harvested, dried and stored.”

Mr Joseph Nkandu, a coffee farmer and executive director of the National Union of Coffee Agribusiness and Farm Enterprises (NUCAFE) has told Seeds of Gold: “It is great that for the first time Uganda has got its own coffee law of this nature. Remember that it is us the farmers that have all along been striving to get, first, the National Coffee Policy which we got in 2013 and, second, the National Coffee Act 2021 which is now here. Of course, I cannot say that it is perfect. Certain parts of it will require amendment in the future.

For example, I personally disagree with the Cess tax which should be scrapped since that tax is passed on to the farmers by the traders, thus reducing farmers’ earnings especially during this period of the Covid-19 pandemic. However, overall, the Uganda Coffee Act 2021 is bound to improve the competitiveness of the coffee sector and to improve prices for farmers. And I appeal to all stakeholders to carefully read the Uganda Coffee Act document well instead of just talking about it based on media reports.”

Given the crop’s strong link to poverty alleviation and foreign exchange generation, the government now wants to accelerate coffee production with the view to making it even more attractive on the international market and to attract better prices. All farmers have to understand that coffee is a food crop and it must be well grown and handled with all the care accorded to food.

Under the Act, UCDA will also do whatever it takes to promote coffee consumption by Ugandans. The farmers must also understand that as a producer country, Uganda is competing with other countries, which we must not allow to produce better or cleaner coffee than we do. The arrival of the National Coffee Act 2021 is seen as a big step to achieve that objective.

Dr Mutaawe Lubogo, a licensed coffee nursery operator at Kanywa Village in Buwunga Sub-county, Masaka District told Seeds of Gold: “Successful coffee production, begins with good planting material. Ugandan coffee should be identified by its unique test and appearance. This can be best achieved by farmers planting the seedlings that have been researched on by Ugandan scientists.

The new law requires all coffee nursery operators to be registered by UCDA and to be routinely supervised by appointed agricultural extension officers. The National Coffee Act 2021 will kick out people who sell fake planting material and ensure that farmers plant the right coffee varieties.”

Mr Musisi Ssebatta, a leading coffee farmer in Lwengo District makes similar observations: “The National Coffee Act 2021 is bound to make a big change in the entire coffee sector because all farmers will be growing coffee varieties from licensed coffee nurseries which are disease resistant, drought tolerant and high yielding. Fake nursery operators that have been preparing low yielding varieties will be thrown out by the law.”

Robert Kabushenga, a prominent coffee farmer in Wakiso District has dismissed the National Coffee Act 2021 as unlikely to serve any purpose. “There was no need to make such a law because it cannot be enforced,” he told Seeds of Gold.

“Who will be there monitoring what the farmers will be doing all the time? We already have a law right now that stops people from speaking on their phones when driving; but how many arrests and prosecutions have you seen taking place? It is more or less like passing a law requiring every man going to have extramarital sex to wear a condom. Who will be there to make sure it is enforced?”

Mr Vincent Tamale, a smallholder coffee farmer at Manja A village says: “The government wants to begin taxing coffee farmers. That is why all farmers are going to be registered including small ones like us here in villages.”

It will register all coffee farmers and issue them with registration numbers at no financial cost to the farmers. It has the power to deregister farmers that don’t comply with the Act. Registration is intended for planning and traceability.

The country should have an idea of how many farmers are growing coffee so that it can plan better for them especially with regard to farmers’ training programmes and provision or importation of inputs. Registration will give every farmer a number so that their coffee can be well identified and should it have any quality issues after leaving the farm the farmer from whom it came will be known.

UCDA will also appoint coffee inspectors who will at any reasonable hour enter any place where coffee is grown, pulped, processed, packed, roasted, stored, warehoused or sold to inspect and examine it for the purpose of ensuring that the provisions of the Act are complied with.

The inspectors have powers to take samples of coffee found on the farm, store, plant, or any other place whether on the farm or off the farm and subject them to such tests as they may deem necessary.

UCDA will appoint coffee specific extension workers to guide farmers in adopting the best crop husbandry practices and pests and disease control. They will also implement and supervise coffee and nursery development programmes.

A coffee trader in Kyotera District who asked not to be named says that given the level of corruption in Uganda nobody ought to be excited by the National Coffee Act 2021 since it will change nothing. “I have heard about it,” he told Seeds of Gold.

“I have been told they will be sending out inspectors to confiscate our coffee when we pick green cherries. But who does not know that such people will always come pretending to be strict about the law only to go away smiling after receiving kitu kidogo?.”

“They might pretend to be serious in the first few weeks but we must not forget that they are Ugandans like all the others in the police, the judiciary, the land offices and other government departments. That law is made to make UCDA people very rich.”

The National Coffee Act 2021 gives more power to UCDA which has been mandated to promote good practices in all activities in the coffee value chain. It will regulate on-farm and off-farm activities, coffee roasting and brewing, sales and marketing, and the quality of coffee and coffee by-products.

The Act gives powers to UCDA to confiscate and destroy coffee found spread to dry on the bare ground or around primary or secondary factory premises, moulded coffee or wet coffee with a moisture content exceeding 14 percent being held or processed by anyone. All coffee farmers’ organisations are to be registered.