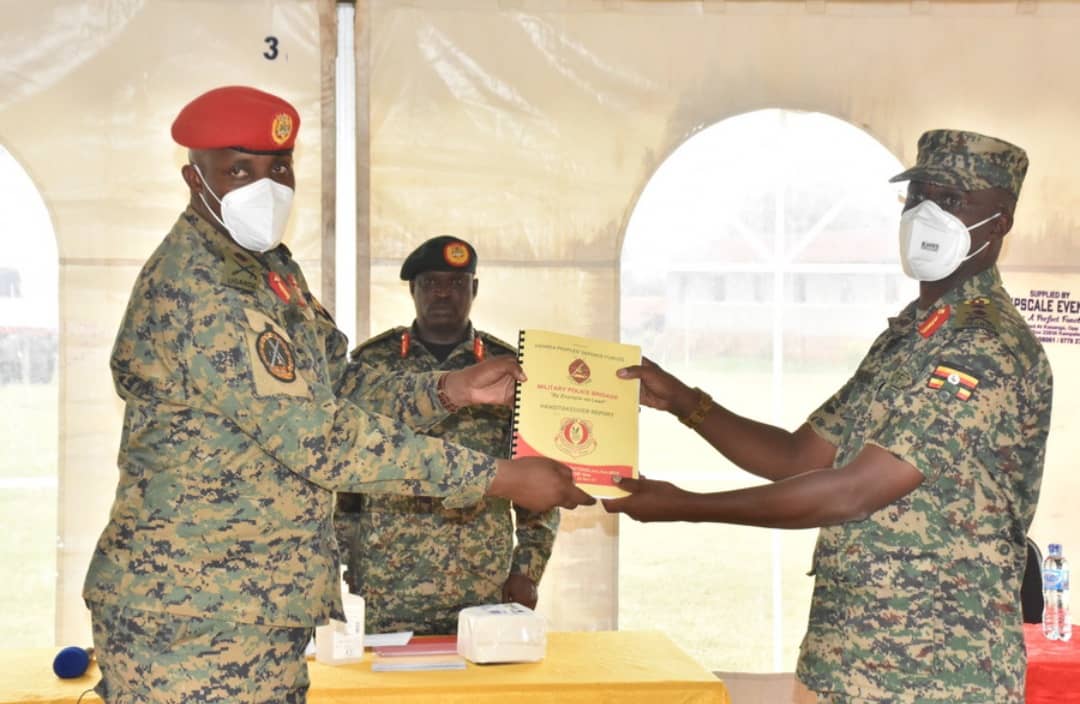 Brigadier Keith Katungi has today handed over office to the new Commandant of the Military Police Brigade to Major General Don Nabasa.

The Deputy Chief of Defence Forces, Lt Gen Peter Elwelu presided over the function held at a ceremony held at the Military Police headquarters in Makindye, Kampala.

“You came at a time when we were having a very serious event in our country which was the 2021 general elections. It was an important task for the entire country and I have no doubts that you will perform very well in your new assignment in Somalia as Uganda Contingent Commander under AMISOM,” Gen Elwelu said to the outgoing commander.

He in the same breath reminded the incoming commandant that his new position means recognition and trust that the commander in chief has placed in him.

“Don’t play around with titles, they are very important. It means the authorities have put trust in you and still believe in you.”

Brig Katungi expressed gratitude to the president and the UPDF leadership for the trust, confidence and co-operation they accorded him during his tour of duty.

“I thank the Commander-in-Chief for giving me the opportunity to serve as Commandant Military Police brigade but also for the new appointment as the Uganda Contingent Commander under AMISOM,”he said.

In his acceptance remarks, Maj Gen Don Nabasa equally applauded the Commander-in-Chief and UPDF leadership for the opportunity and confidence entrusted in him to command the Military Police brigade.

“As we advance our core values of service, patriotism, justice and sacrifice; you, our leaders have maintained the forces on our historical mission and providing security so as to enable Socio-economic transformation of our country,” he said.

In the same message, the president sent Katungi to Somalia to replace Maj Gen Nabasa as the UPDF contingent commander.

Katungi is expected to report for duty in Somalia early next month as his duty of tour starts then.