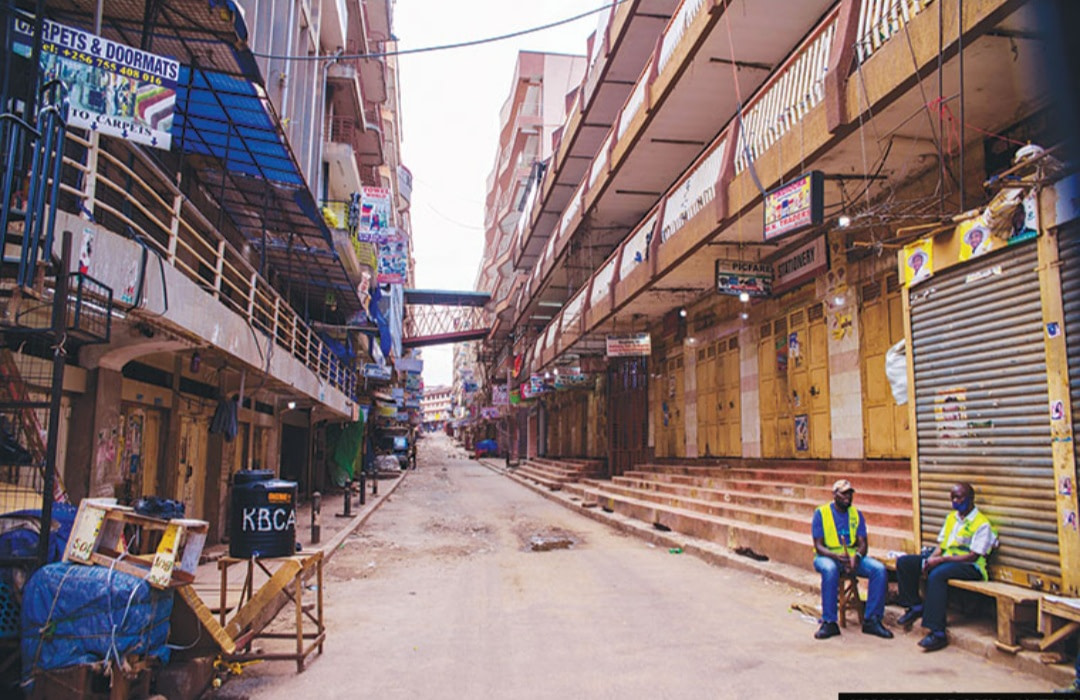 Edward Muyanja can easily summarize the last 12 months of business in downtown Kampala in one word – painful!

Muyanja, a trader in Gwanda Arcade in downtown Kampala, compares the business fortune from the pre-Covid-19 times to the current situation as one which is simply worlds apart.

“Business is not good,” he says as a matter of fact. “People are no longer working as before due to Covid-19 effect. Here in Gwanda Arcade, some businesses closed.” He explained that “people came and picked their merchandise and left the building.” Those who tried to ride through the Covid storm, Muyanja added, reached a point and gave up.

Joel (not real name) quit his bank job in early 2020. After more than a decade working for one of the largest banks around town, he felt it was time to make the leap. He wanted to be his own boss.

Joel opened up a money lending business. His location: the busy downtown Kampala area, where arcades such as Gwanda are located. This was around July 2020 as the measures of the first lockdown against the spread of Covid-19 were being eased. The first couple of months were encouraging. There were signs of a strong economic recovery on the horizon.

“I had my usual customers who I trusted could not default,” Joel said. Most of his customers had businesses in Kikuubo, an area known to be the pulse of trade in Kampala.

More than a year later, Joel’s voice breaks when he speaks of the ordeal he is going through.

“When some of my clients default, they say: ‘look at my shop, it is closed. I have not been working. How do you want me to pay you back?’ Joel, who is battling a drop in sales and a spike in loan defaults, narrates, saying he usually understands the dilemma of his clients.

Joel says business has dipped in downtown Kampala that it sometimes does not make sense to go to office to work. Muyanja says if the first lockdown of early 2020 left businesses gasping for air, the second one of June 2021 simply suffocated them to death.

“The second lockdown has also made businesspeople lose morale for work because the customer numbers have reduced. You can spend a day with no customer…” Muyanja said.

Uganda’s economy remains fragile as a result of the impact of Covid-19. Tourism receipts, one of the largest foreign exchange earners, have reduced; credit to the private sector is not growing as much as it should; and the closure of schools has hurt the education sector, one of the biggest consumers in the economy.

As a result, economic growth for this financial year is expected anywhere between three per cent and four per cent, according to different official projections. This is below the average five to six per cent annual growth rates before Covid.

However, it is expected that infrastructure projects in the roads, electricity and oil gas sectors, are expected to drive this mild growth. The trade and consumer market is still expected to struggle for the next couple of months as the wreckage from all the different lockdown measures continues to pile up.

Ramathan Ggoobi, the permanent secretary in the ministry of Finance, Planning and Economic Planning, said the government will embark on a massive vaccination campaign ahead of fully opening up the economy.

As part of the measures, Ggoobi said the government will “pursue a growth-with-jobs strategy” – whatever that means – in the areas of agro-industrialisation, tourism, manufacturing, oil and gas and ICT.

This language of macroeconomic recovery is one that many traders in downtown Kampala do not understand. Take one trader, who declined to be named. She said she is closing her business in the Kikuubo area, which she opened in 2019, due to low sales.

“Things are just too bad,” she said, sounding distressed. In her small shop, where she sells clothes, she said she would make about Shs 5 million a week before Covid-19 hit. Today, she can barely make Shs 2 million. She said the amount of money she pays in rent, and other related costs, nearly wipes out her profit.

“Even that one month when our shops were closed (second lockdown), the landlords forced us to pay rent,” she said.

It is this resolve by landlords, who are also battling to clear loans, that has seen many shops in arcades remain empty. A walk through Gwanda Arcade in Kisenyi taxi park, Ham shopping mall block E, Qualicell bus terminal building, Totala business centre at Luwum street, Timosewo Mpoza also at Luwum street and Majestic plaza, will leave you pointing to at least 80 per cent of the shops closed.

“My neighbors have left the shop because they can no longer pay rent; so, they went home where they run their businesses…,” said Sophie, who deals in jewelry at Majestic Plaza.

Joel, the moneylender, signs off by saying that the public should not be duped into thinking that the fair performance that the banks recorded for 2020 is a sign that economic recovery is on track.

“Many of those banks only postponed the period that their clients should pay back the loans. On their books, the loan does not look like it is non-performing. But now, that one year grace period ended around June. Now wait for the worst!”